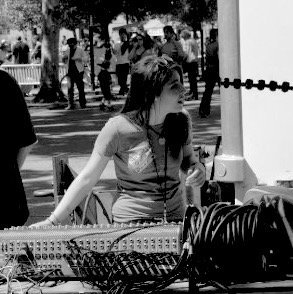 Shiva Shahmir is a first-generation Iranian American artist, creative organizer, and frequency practitioner in the fields of music, internet and radio. As an audio engineer, she has toured, worked various venues as well as conferences and festivals across the United States and Canada since 2008. Shiva holds a Bachelor of Arts in Fine Arts with a focus in architectural theory and environmental design from the University of British Columbia, Vancouver and a Masters in Professional Studies with distinction from Pratt Institute in Arts and Cultural Management.
Shiva trained in music her entire youth and began apprenticing in sound engineering as a teenager volunteering for KDVS 90.3FM radio station at UC Davis for live in studio, recording, and concert performances. Because of her extensive experience in northern California prior to beginning her bachelor's degree, during her studies at UBC, Shiva simultaneously served as the Senior Audio and Recording Engineer for the University of British Columbia School of Music where she trained and managed the work-study team in audio and video recording. Since 2017, Shiva has served as the president of the Detroit nonprofit Spread Art which serves as a creative incubator providing affordable and accessible space as well as opportunities for the Detroit community to collaborate, exhibit, experiment, experience, perform, practice and organize cultural activities such as art, dance, music and storytelling. Shiva also works with Detroit Community Technology Project where she collaborates with Detroiters and beyond to help bridge the digital divide and promote digital equity through the Equitable Internet Initiative.