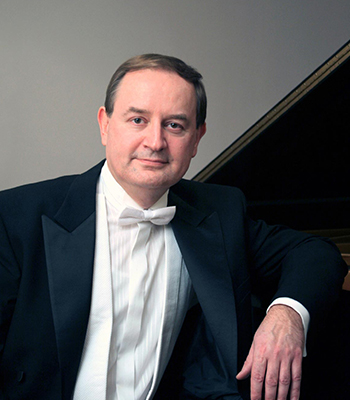 Kazimierz Brzozowski has garnered international acclaim for his captivating performances at the piano, in particular the music of Chopin. He frequently appears in concerts in the United States, Japan and Poland and has performed as a soloist with the Detroit Symphony Orchestra, Polish Radio Orchestra, Lublin Philharmonic and other orchestras in the U.S.A. and Poland. He has made recordings for the Polish Radio and Television, recorded compact discs with music by Bach, Mozart, Chopin, Szymanowski, Liszt and Bartok. His recordings are also included in popular CD sets “Living with the Classics”.

He is a graduate of the Warsaw Chopin Academy of Music (M.M.) and University of Michigan (DMA). He has received awards from the Chopin Music Academy in Warsaw, Ann Arbor Musical Society in Michigan, University of Michigan and Kosciuszko Foundation in New York. He is a prize winner at the Polish National Piano Festival and Chopin Society Competition in Warsaw. Mr. Brzozowski is a Steinway artist. In July 2016 at the International Piano Festival in Nałęczów he was decorated with the Medal of Merit for the Polish Culture awarded by the Ministry of Culture and National Heritage of the Republic of Poland in recognition of his artistic and pedagogical achievements. At the same time he received Appreciation Awards from the Mayor of the City of Nałęczów and from the Lublin Voivodeship Marshal for his cultural contribution to the city and the region.

Dr. Brzozowski is the founder and director of the International Piano Festival, held annually in Nałęczów, Poland. This event, now in its twentieth year, attracts international high school and college students for intensive study and performances, both solo and with a chamber orchestra. Faculty and guest artists come from Poland, United States, Russia, and Japan.

He has been a WSU faculty member since 2009.