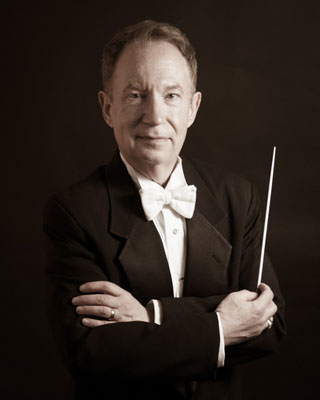 Gerald Custer is a multifaceted choral musician, active as conductor, composer, author, clinician and teacher. He earned the Bachelor of Music degree in choral music education at Westminster Choir College, a master's degree in orchestral conducting with additional work in historical musicology at The George Washington University, and the Doctor of Musical Arts in choral conducting at Michigan State University

Dr. Custer studied choral conducting with Dennis Shrock and Joseph Flummerfelt, and took part in master classes with Robert Shaw and Wilhelm Ehmann. While an undergraduate, he served as assistant conductor of Westminster’s Collegium Musicum and sang for Leonard Bernstein, Pierre Boulez, and William Steinberg with the New York Philharmonic, the Philadelphia Orchestra, and the Pittsburgh Symphony. While a graduate student, he founded and conducted the George Washington University Chamber Singers and served as the associate conductor of the Alexandria Symphony Orchestra.

For ten years, Dr. Custer conducted The Arbor Consort, a chamber choir which was a featured ensemble at the Michigan Renaissance Festival. He also served as interim conductor of the Saginaw Choral Society and directed choral activities at Schoolcraft College and Oakland Community College. He presently teaches music theory, composition, and graduate choral literature in the Department of Music at Wayne State University, leads a multiple-choir program at the First Presbyterian Church in Farmington Hills, Michigan, and is the artistic director and conductor of the Seaway Chorale and Orchestra.

A Grammy-nominated, award-winning composer and arranger, Dr. Custer was a student of Malcolm Williamson. His work is featured on Inscape: Choral Music of Gerald Custer performed by the Voices of Anam Cara conducted by James Jordan, and as the title track on of the CD Innisfree by the same forces. He has written extensively for the choirs of Westminster Choir College and other college and university choirs across the country. Commissions include works for the choir of the Interlochen Arts Academy, a choral symphony premiered at Carnegie Hall by the Metropolitan Youth Orchestra of New York, and a setting
of the Stabat Mater Speciosa premiered by members of the Minneapolis Symphony Orchestra.

Dr. Custer has contributed chapters and music to both volumes of James Jordan’s The Choral Rehearsal and provided musical examples and performing editions for Dr. Jordan’s Music for Conducting Study. He is the choral methods columnist for the GIA Quarterly, a publication read by more than 25,000 musicians in the English-speaking world. He is a contributor to Bella Voce, the ACDA Choral Journal, and other professional publications. His most recent book, The Composer’s Craft: A Practical Guide for Students and Teachers, was released in March 2013.