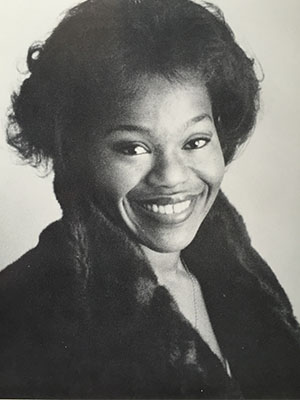 Frances Brockington, soprano is a native of Detroit and an area favorite.

Miss Brockington is an Associate Professor of Voice in the Department of Music at Wayne State University. In addition to her duties at WSU, Miss Brockington maintains a diverse performing schedule, a private studio, and serves as an adjudicator for various organizations both regionally and nationally. She holds the designation of Master Teacher. She is also Director of Music at St. Margaret of Scotland Catholic Church. After a long association with the National Association of Pastoral Musicians and the Catholic Archdiocese of Detroit, she remains a valued advisor to both organizations.

Miss Brockington has appeared as soloist with various orchestras and opera companies both here and abroad. She counts among her roles: Violetta from La Traviata by Verdi, Mimi from La Boheme by Puccini, Susannah from Le Nozze di Figaro, Clothilde from A Bayou Legend by Still, Gilda from Rigoletto by Verdi, Monica from The Medium by Menotti, Lucy from the Telephone by Menotti, the Native Woman from Emperor Jones by Gruenberg, and Despina from Cosi fan Tutte by Mozart to name but a few. Her oratorio roles include Messiah by Handel, soprano from Requiem by Verdi, Mozart Requiem, Berlioz Requiem, Vesperae solennes de confessore by Mozart, Fauré Requiem, Rutter Requiem, Rutter Gloria, Gloria by Vivaldi, Mozart Great Mass in C to name but a few.

Miss Brockington has served on the National Steering Committee for Cantor Certification sponsored by the National Association of Pastoral Musicians. Formerly, she was the the Director of the Cantor Certification Program for the Archdiocese of Detroit through IPLM, one of the first formally organized programs in the country. She has also appeared as clinician, keynote speaker, and Master Teacher for these organizations. She is also a member of the National Association of Teachers of Singing and serves as an adjudicator as well.

Miss Brockington is the author of A Troubleshooter's Voice Manual and Singers on the Move. She is the featured artist on the CDs Blessed Assurance and With the Lord issued by OCP. She co-wrote and performed in "Music Tells it Like it Is" and "All About Our Voices" both children's operas currently being utilized by a number of education departments within national opera companies.