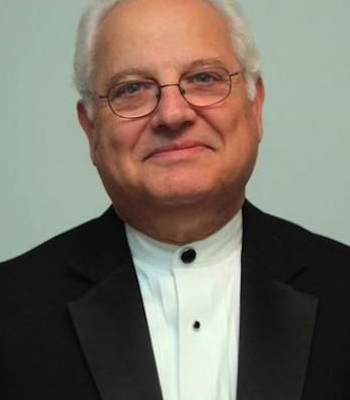 Prof. Markou has conducted orchestras in Germany, Italy, England, Poland, Romania, Slovakia, Chile, Greece, Cyprus, and many orchestras in the USA where he has been active as a conductor, violinist and music director of several ensembles for many years. Recent guest conducting engagements included concerts with the Filarmonica "Banatul" of Timisoara, Romania, the Moravian Philharmonic of the Czech Republic, the National Romanian Radio Symphony Orchestra, Sinfonia Varsovia, Krakow Philharmonic, and Sinfonietta Cracovia of Poland, the Orquesta Sinfonica de Concepcion in Chile, the Rochester Philharmonic in New York and the Cyprus State Orchestra. From 1987 until 1994 he was Music Director of the Brevard Symphony Orchestra in Florida. He has also held conducting posts with the Cyprus Radio Orchestra, the Canton Symphony in Ohio, the Carnegie Mellon Philharmonic, and the Somerset Summer Music Festival in Pennsylvania. Previously he served on the faculties at Carnegie Mellon University and the University of Pittsburgh where he was director of the University Orchestra and conductor for the New Music concerts. Earlier he served as associate conductor of the New England Conservatory Symphony in Boston, Massachusetts, under Gunther Schuller. Additional conducting collaborations included the Pittsburgh Opera Theater, the Pittsburgh Ballet, the Laurel Ballet Company, Dance Alloy and others. A number of his concerts have been broadcast on radio and television.

Markou had his early training at the National Conservatory of Greece in his native city of Nicosia, Cyprus, at the Royal College of Music in London, at Indiana University in Bloomington, and the New England Conservatory in Boston where he earned his graduate degree in Orchestral Conducting. He has won many awards including conducting fellowships from the Aspen Festival and the American Symphony Orchestra League and in 1978 he was invited to participate in the Cleveland Orchestra's Conductors Symposium under the direction of Maestro Lorin Maazel. He has also served as cover conductor for a number of subscription concerts with the Pittsburgh Symphony and the Detroit Symphony under Maestros Maazel, Eschenbach, Herbig, Semkow and others. In 1999 he served as host for a National Conducting Workshop and Master class with Neeme Jarvi for the American Symphony Orchestra League and in 2000 he was host and faculty for a national conducting workshop of the Conductors Guild.

In addition to his conducting, Prof. Markou is an accomplished violinist, having studied with Ruggiero Ricci, and was a member of several chamber ensembles. He also holds the degree of Barrister at Law from Gray's Inn, London. In 1989 he was awarded an honorary Doctor of Music degree from Seton Hill University in Pennsylvania, and in 1994 he was named Distinguished Performing Artist of the Year by the Cultural Council of Greensburg, Pennsylvania.