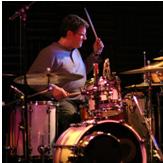 David Taylor studied percussion performance at the University of Cincinnati/College-Conservatory of Music where his principal teacher was William Youhass.  Other teachers include Salvatore Rabbio, Gordon Stout, and Tim Hagans.  Since returning to Detroit, David has performed shows at the Fox, Masonic, and Fisher Theatres.  In addition, he performs regularly with the Michigan Opera Theater Orchestra  and the Detroit Symphony Orchestra.  David has been a member of Wayne Sate University's jazz faculty since 1991 and has toured Europe and South Africa with saxophonist Chris Collins.  He has been on countless recordings, including work with Emmy award winning composer/producer Joseph LoDuca.  David has taught at the Interlochen National Music Camp.  He is a Vic Firth Artist.