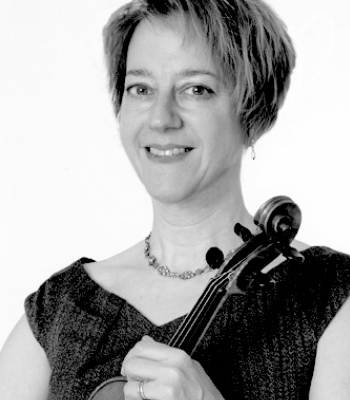 Laura Leigh Roelofs is Associate Professor of Violin and String Area Coordinator in the Department of Music; for the 2014-15 academic year she is also served as Interim Associate Department Chair. Dr. Roelofs maintains an active schedule of solo and chamber music recitals in venues throughout the U.S. She holds the Assistant Concertmaster chair with the Michigan Opera Theatre Orchestra; in recent MOT seasons she has been featured as violin soloist for Tchaikovsky's Swan Lake with the Barcelona Ballet and in an onstage role in Handel's Julius Caesar opposite renowned counter-tenor David Daniels.

Dr. Roelofs performed for fourteen seasons as Associate Concertmaster of the Richmond Symphony Orchestra. She was a founding member of the Oberon String Quartet, artists-in-residence at Virginia Commonwealth University, and she performed regularly with Currents, a new-music ensemble based at the University of Richmond. While serving as Artist-Teacher of Violin and Viola at Georgia State University, she toured the Southeast region as violinist/violist with the Atlanta Chamber Players. Dr. Roelofs has appeared as soloist with a number of orchestras, including the Baltimore Symphony and the Richmond Symphony. She holds a B.Mus. in Violin Performance from Boston University's School of Fine Arts, where she was a student of Roman Totenberg; she received both M.M. and D.M.A. from the Catholic University of America where she studied with Robert Gerle.
In her own teaching, Dr. Roelofs works with students to develop body awareness and efficient physical habits, helping them eliminate barriers to expression and technical facility. Her students have been awarded scholarships for pre-college, undergraduate or graduate study at schools including Boston University, Interlochen Academy, Longy School of Music, Michigan State University, University of Michigan, and Yale. Many of her former students have gone on to professional positions with symphony orchestras, universities, or public school orchestra programs.