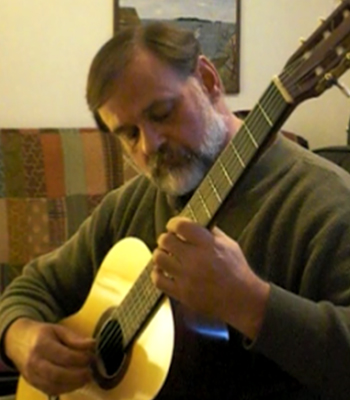 Brian Roberts has been teaching and performing since 1972, after having studied at the NATIONAL AKADAMIE OF MUSIC in Vienna, Austria. His performances have taken him as far as England, Austria, Nova Scotia and throughout the Midwest, drawing such comments as "Spontaneous and Alive" from the famed author and critic, Hans Keller and "Elegant and Musical" from the MILWAUKEE JOURNAL. Brian's major long term teachers were John Holmquist, in Milwaukee and Cleveland, Gilbert Biberian in Milwaukee and London, England, Karl Scheit in Vienna, Austria and Leo Witoszynksyj in Graz, Austria. His major short term teachers were Sharon Isbin in Burlington, Vermont; Manuel Barrueco in Milwaukee, Gerald Garcia in London and Carol van Fegglen in Halifax, Nova Scotia. Upon receiving his Master of Music degree from THE CLEVELAND INSTITUTE OF MUSIC/CASE WESTERN RESERVE UNIVERSITY in classical guitar performance, he joined the faculty there to develop the guitar program. An avid and interested teacher of long standing, known for his mentoring and personally involved style of teaching, Brian's students have won many awards and presently hold college teaching positions, as well as performing throughout the Great Lakes Region. Currently, Brian teaches graduate and undergraduate classical guitar performance majors and minors at WAYNE STATE UNIVERSITY, UNIVERSITY OF MICHIGAN- DEARBORN and CONCORDIA UNIVERSITY. He also performs, both as soloist and with Mary Lou Roberts in the ROBERTS GUITAR DUO, teaches at workshops and institutes around the Midwest, has a private teaching studio in Ann Arbor and is Co-Founder of the ANN ARBOR CLASSICAL GUITAR SOCIETY.