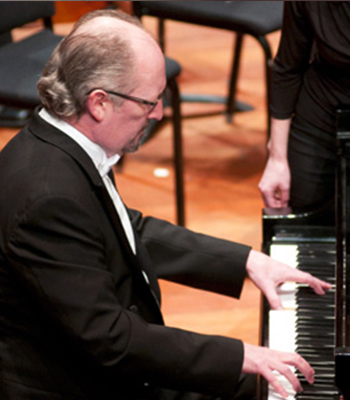 Robert Conway is an associate professor of piano at Wayne State University, where he is also the director of the piano area. Since 1989, he has performed regularly as orchestral keyboardist with the Detroit Symphony Orchestra and has been a soloist with them on several occasions. In 2013, he performed the solo piano part to Symphony No. 4 by Charles Ives in Carnegie Hall as part of the Detroit Symphony’s presentation of the complete symphonies of Ives. He has served as a musical representative of the United States as an Artistic Ambassador of the United States Information Agency on a month-long tour of South Asia and the Middle East in 1997, as well as acting as a Department of State Cultural Envoy to Jamaica in 2005 and Azerbaijan in 2008. As a soloist and chamber musician, he has appeared at numerous national and international festivals, performed concertos with many orchestras, collaborated with prestigious composers, given countless premieres and is featured on several recordings on numerous labels. In 2009, he performed as part of the American Romanian Festival in Timisoara and Sannicolau Mare, Romania.