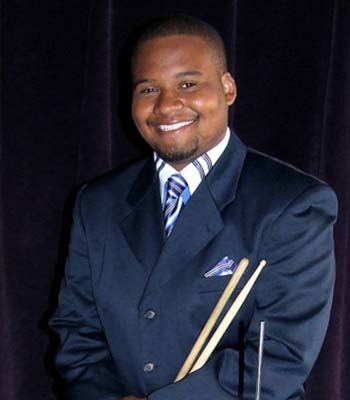 Jazz drummer Sean Dobbins got his start as sought-after Detroit area jazz sideman at a young age, when he would regularly play with Blue Note artist Louis Smith. As Sean's Career progressed, he found himself the recipient of many awards and accolades including the "Woody Herman Jazz Award", an award for outstanding musicianship, as well as the Louis Armstrong Scholarship. Due to Sean's great talent both as a player and an educator, he has been the focus of countless news articles and jazz radio programs.

Sean's sound can best be described as hard-driving, solid rhythm with refreshing melodic sensibility. Some of Sean's influences include Art Blakey, Jeff Hamilton, Jeff "Tain" Watts, Ed Thigpen, Sonny Payne, and also Detroit area greats Gerald Cleaver and the one and only Elvin Jones. A product of the Ann Arbor Public Schools, Sean has stayed devoted to education throughout his life. Early mentor Louis Smith, an Ann Arbor Public Schools band teacher, impressed the importance of a good education upon Sean at an early age. Sean is known in his community as a band director, drum teacher and positive influence for many.

In 1999 Sean was asked to become the director of the Ann Arbor Public Schools Summer Jazz Program. This program was designed to help educate and inspire young artist as they began their quest of learning jazz. In 1998, a year before Sean's arrival, the program was in jeopardy of being cancelled due to low enrollment. In 2000, a year after Sean took over the reigns, the enrollment more than tripled and a year later, the group was featured on WEMU, a national jazz radio program.

As a father of three, Sean knows, understands, and accepts the challenge of continuing the art from through clinics, master classes, and concerts for up and coming musicians. Sean makes it a point of incorporating educational opportunities into all of his road trips.
Sean is no stranger to local or national headlines; he frequently plays at venues such as the Firefly Club (Ann Arbor), Baker's Keyboard Lounge (Detroit), the Music Hall Jazz Cafe (Detroit), Murphy's Place (Toledo) and Buddy Guy's (Chicago). His recent recordings include "Odyssey" (PKO Records), "Revealing" (Reparation Records), and "Christmas Songs for Jazz Lovers" (PKO Records), and Blue Horizons featuring Sean and his quintet, the Modern Jazz Messengers.