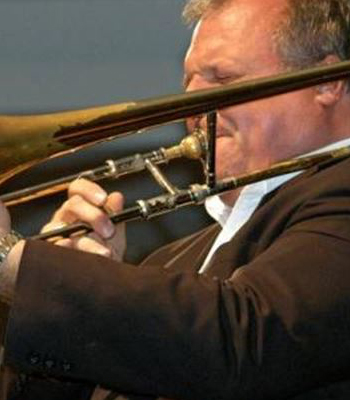 Ron Kischuk is in his fourth season as the Artistic Director of the Toledo Jazz Orchestra. He is a Yamaha clinician and performing artist, and is the leader of The Masters Of Music Big Band, The Tartarsauce Traditional Jazz Band, and is the owner of Brassworks Entertainment in Detroit and The Masters Of Music Conservatory in Royal Oak. Ron is the Detroit area's most prominent trombonist. He has been a featured soloist with the Detroit Symphony Orchestra on several occasions and has performed with the Orchestra many times as Principal or Assistant Principal trombonist. His Masters Of Music Big Band has backed up Johnny Mathis, Hal Linden, The Temptations, Natalie Cole, Gladys Knight and Regis Philbin among others. Ron has 14 CD releases as leader including the recently released Masters of Music Big Band 'Plays Kenton' featuring Peter Erskine - Live at the Music Hall. He has recorded with Aretha Franklin, Vickie Winans, Tim Bowman, The Four Tops, The Temptations, Grand Funk Railroad, The Les Brown Band, The Emerald Sinfonietta, Russ Miller, Paul Finazzo, Bobby Murray, Stewart Francke, Karen Newman, Alto Reed, Jimmy Scott, Randy Scott, The Birmingham Bloomfield Symphony Orchestra, and is lead trombone on the Grammy winning soundtrack Standing In The Shadows Of Motown. In the past few months he has recorded a new 7 trombone CD with jazz legend Curtis Fuller, a fifth Tartarsauce Traditional Jazz Band CD, a new Masters of Music Big Band (minus 9) recording and two new Masters of Music quartet CDs.